Pear Tart for One 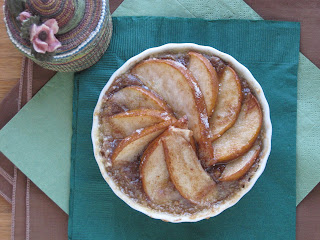 Every day, I count how many grams of protein I’ve eaten. Sometimes it’s hard to get up to my “normal” range (39-45 grams a day), so I have to supplement my meals with a protein-heavy dessert like this one. <sigh> Poor me. It’s such a chore to get enough protein sometimes.

For the Crust:
2 teaspoons vegan butter (I like Earth Balance)
4 teaspoons granulated sugar
2 ½ TBLSP almond meal (garbanzo or coconut flour would also work, as would all-purpose)
2 teaspoons brown rice flour
1 teaspoon brown rice syrup
For the Filling:
2 ½ TBLSP almond butter (you could certainly use peanut butter, too)
4 teaspoons water
2 teaspoons maple syrup
Slosh of vanilla extract
For the Pear Topping:
1/3 (or so) of a medium-sized pear
2 teaspoons granulated sugar
Sprinkle of ground cinnamon
2 teaspoons of sliced almonds for garnish (you don’t have to match the butter—if you’re using peanut butter in the filling, you could still use almonds on top, or mix and match. Whatever makes you happy.)

Preheat the oven to 325 degrees Fahrenheit.
Make the Crust: 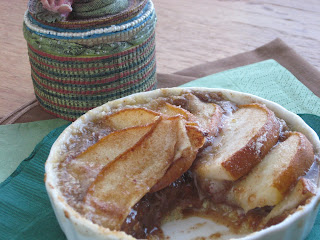 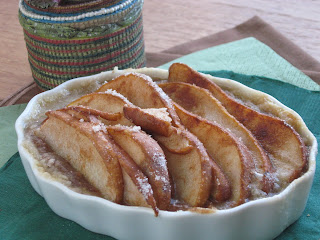 Posted by Melanie Spiller at 9:15 AM