Pear Pie with Streusel and Caramel Sauce for One 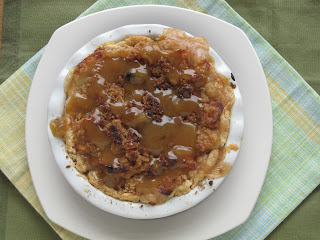 My neighbor gave me some pears. Now, pears are very good on their own, and they’re pretty good if you poach them in wine with a couple of cloves and some cinnamon. But if you really want to indulge in the truly sensuous nature of a pear, you need to make this pie. Right now. Just stop what you’re doing and make it!
For the Crust:
½ cup all-purpose flour
1 pinch salt
2 TBLSP shortening or vegan butter
1 ½ TBLSP ice water (or half vodka)
For the Pears:
1 ½ TBLSP all-purpose flour, divided
1 TBLSP granulated sugar
Sprinkle of ground cinnamon
Sprinkle of ground ginger
Sprinkle of salt
¾ teaspoon fresh lemon juice
1 to 1 1/2  medium-firm pears, peeled, cored, and cut lengthwise into ½-inch wedges (or just chop it up. It’s up to you.) (about 1 cup of chopped fruit)

¾ TBLSP brown sugar
¾ teaspoon chilled butter, cut into pieces
For the Sauce:
¾ teaspoon brown sugar
1 TBLSP non-dairy creamer (use regular milk if you don’t have the thick stuff, and add a sprinkle of cornstarch or arrowroot to thicken it a bit)
1 teaspoon vegan butter, softened
Tiny splash of water 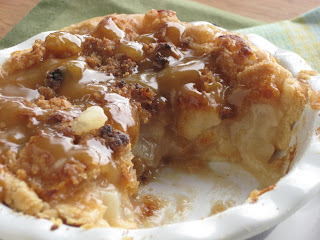 Posted by Melanie Spiller at 8:42 AM