Simple Linguini and Asparagus for One 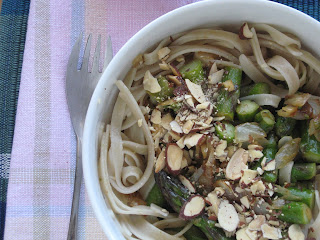 I fell in love with asparagus in Germany, where they often have a whole page of "Spargel mit" on menus. Thank heavens it's plentiful and inexpensive most of the year where I live too!


One serving’s worth of linguini noodles (for me, that’s as much as I can hold loosely in the circle formed between thumb and forefinger)
1 TBLSP olive oil
¼ onion, sliced thinly
1 clove garlic, minced
¼ pound asparagus, trimmed and chopped into 1-inch segments
1 TBLSP water
Salt and pepper to taste
¼ lemon
½ TBLSP almonds, toasted and sliced 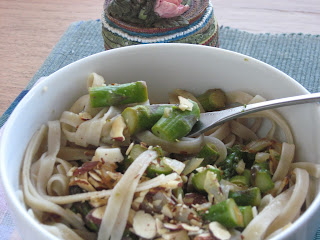